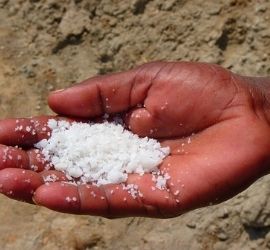 Saltpeter (potassium nitrate) is a naturally occurring chemical compound. It is white in color and soluble in water with a cool, salty taste.

Saltpeter is the common name for both potassium nitrate and sodium nitrate. It is a commercially useful ingredient in fertilizers, propellants, explosives, food preservatives, and toothpaste for sensitive teeth. A concentrated solution of potassium nitrate is useful in landscaping and farming.  It helps to speed up the decomposition of vegetable matter and remove tree stumps. For mechanical applications, it has oxidizing properties that make it useful as a rust inhibitor for metals. Potassium nitrate also has medical use in the treatment of high blood pressure and heart ailments.

Although saltpeter (potassium nitrate) is used in fertilizer and fireworks, it is also used to preserve meats. Additionally, it has a reputation for lowering libido, but this is only a myth.

Potassium nitrate can be dangerous if consumed. It can cause kidney damage or anemia, as well as headaches and digestive disorders.  Concern about the relatively small amounts of nitrites used as food additives began in the 1960s.

At the time, researchers noticed that domestic animals fed fishmeal preserved with nitrites were dying of liver failure.  The problem was traced to a group of compounds called nitrosamines.  These formed by a chemical reaction between the naturally occurring amines in the fish and sodium nitrite.  It turns out nitrosamines are potent cancer-causing agents and their potential presence in human foods became an immediate worry.  Examining a wide variety of foods treated with nitrites revealed that nitrosamines could readily form under certain conditions.  Fried bacon, especially when charred and crispy consistently showed the presence of these compounds.  So did hot dogs and preserved lunch meats.  (Source: mcgill.ca)

Where Does Saltpeter Come From?

Potassium nitrate occurs as crusty deposits on the surface of the Earth, on walls and rocks, and in caves.  It forms abundantly in certain areas of Spain, Italy, Egypt, Iran, and India. In the USA there are large deposits in the great limestone caves of Kentucky, Virginia, and Indiana.  Scientists believe the deposits formed from the overlying soil and accumulated by percolating water. During the Revolutionary and Civil Wars, there was a great demand for saltpeter as a key ingredient for gunpowder.  Its importance led to the formation of saltpeter plantations, or nitriaries.  The natural conditions were replicated by exposing mounds of decaying organic matter mixed with lime to chemically react in the atmosphere.

Potassium nitrate was used at one time in many different diseased conditions, especially asthma.  However, now it is rarely used medicinally, except as a diuretic. Its alleged value as a drug for suppressing sexual desire is conjecture and urban legend.

Saltpeter is a common food preservative and additive, fertilizer, and oxidizer for fireworks and rockets. It is one of the principal ingredients in gunpowder. Potassium nitrate is used to treat asthma and in topical formulations for sensitive teeth. It was once a popular medication for lowering blood pressure. Saltpeter is a component of condensed aerosol fire suppression systems, salt bridges in electrochemistry, heat treatment of metals, and thermal storage in power generators. (Source: thoughtco.com)

Gunpowder as it came to be known, is a mixture of saltpeter (potassium nitrate), sulfur, and charcoal. Together, these materials will burn rapidly and explode as a propellant. Chinese monks accidentally discovered the technology in the 9th century CE.  Their primary quest was to discover a life-extending elixir. Saltpeter had been in use by the Chinese since the late centuries BCE for medicinal purposes. When it was discovered to be incendiary and explosive it was immediately applied to warfare.

The Mongols soon emerged as an ambitious and violent society.  Their conquests and invasions acted as a vehicle by which gunpowder would spread to the rest of the world. It is documented that the technology had reached the Middle East by the 13th century CE.  At this point traders, as well as crusaders, would have come into contact with it.  The main problem with early gunpowder was that the ingredients had to be measured properly.  Otherwise, the mixture would not ignite properly or explode. As a result, knowledge of the required materials was not so much the problem with the new technology.  The key to success was the knowledge of the precise formula. (Source: brown.edu)

It’s a popular myth that saltpeter inhibits male libido. Urban legend has it that saltpeter is added to food in prison and military facilities to curb sexual desire.  However,  there is no evidence to support this has been done or would even work. Saltpeter and other nitrates have a long history of medical use, but it is toxic in high doses.  It can produce symptoms ranging from a mild headache and upset stomach to kidney damage and dangerously altered blood pressure. These unwanted side-effects would have become quickly apparent if saltpeter had been widely used on prisoners and military populations.

Can you still buy saltpeter?

You used to be able to buy potassium nitrate as saltpeter in many garden supply stores. While it is difficult to find saltpeter, you can still purchase potassium nitrate. This is used to make smoke bombs and certain other fireworks.

What happens if you eat saltpeter?

Potassium nitrate can be dangerous and toxic if consumed. For example, it can cause kidney damage or anemia, as well as headaches and digestive distress.

Is sodium nitrate and saltpeter the same?

Another chemical compound referred to as saltpeter is sodium nitrate, which appears naturally in leafy green vegetables. Like potassium nitrate, it’s used to cure and retain color in meat products. Over time sodium nitrate breaks down and becomes sodium nitrite.

Up Next:  What it Means to Open a Can of Worms 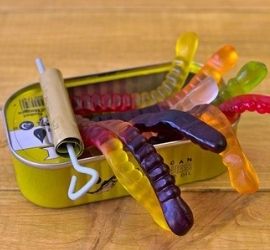 Opening a can of worms is an American idiom.  It means to say or do something to cause a situation to become more troublesome or complicated.

Metaphorically speaking, to open a can of worms is to examine or attempt to solve some problem.  However, it inadvertently complicates the issue and creates even more trouble. Literally, opening a can of worms can result in, or create more trouble than you bargained for. Ask any fisherman!  It is quite likely that the phrase was originally inspired by real fishermen dealing with a very real can of worms.

The exact origin and first usage are not definite or clear-cut.  However, many dictionaries and linguists agree that the phrase originated in the U.S. in the early 1950s. 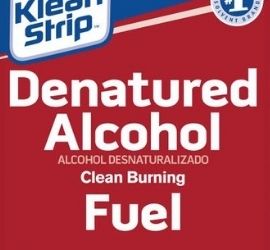 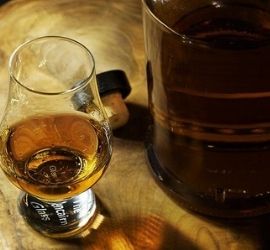 Difference Between Bourbon and Whiskey – What Is Whiskey? Whiskey is an alcoholic spirit.  It is fermented and distilled using a combination […]